IOTA (MIOTA) is a distributed ledger cryptocurrency that facilitates transactions between devices and machines in the Internet of Things. It is the short form of Internet of Things Application, and it solves the higher transaction fees and scalability issues of blockchain technology.

The main difference is that on a decentralized protocol, the random verification of transactions is called Directed Acyclic Graph (DAG), but IOTA offers a similar (if not better) process known as Tangle.

IOTA platform plans to have billions of transacting nodes on the network, and it is designed to grow the processing power of nodes as the network grows. Each transaction is linked to two other transactions that it verifies, and the recent transactions are linked to any future transactions.

In this way, it solves the scalability problem of the network. Each device it adds, contributes to the computing power and improves the verification process. Besides that, this process also eliminates block mining.

Though Tangle is an innovative technology, MIOTA is still new, so we cannot predict the future because the coin does not have too many use cases. It aims to create a platform for machine-to-machine transactions that share and allocate all the valuable resources effectively.

At the time of writing, IOTA was trading around $0.637. Interestingly it took support at around $0.58 and seems like it may break this level soon. If it breaks the level, it will be hard to mark the next support level.

Could we find a considerable sell-off soon? Let’s analyze the weekly chart for a long-term view. 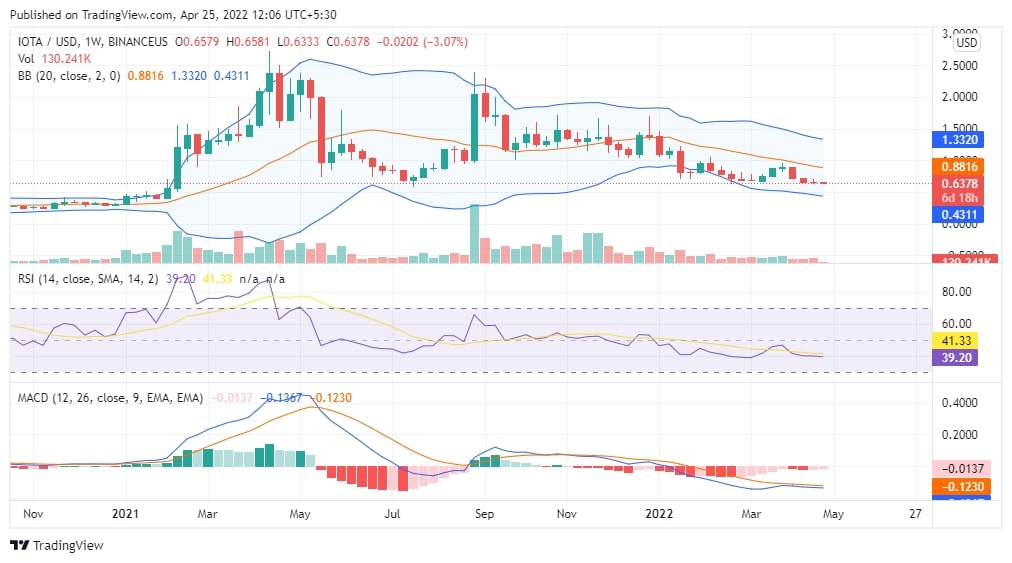 On the weekly chart, the MIOTA price has been consolidating between $0.84 and $0.64. We think this sideways movement will continue for this year because technical indicators also suggest bearishness.

The candlesticks are in the lower half of the Bollinger Band, while RSI is 39 and MACD is also trading below Signal Line. The future of IOTA will depend on market adaptation.

We do not think it is the ideal time for a short-term investment in MIOTA, but if you believe in the fundamentals of this cryptocurrency, then you can start accumulating some coins for the long term.