Disclaimer: This is a sponsored press release. Readers should conduct their own research prior to taking any actions related to the content mentioned in this article. Learn more ›

On April 13, Global Web3 Eco Innovation Online Summit (GWEI Summit Online) officially announced the beginning of Web3 summer tour lasting more than a month. After the end of the first week, we will continue to open the agenda of the second week of the GWEI 2022 Online Summit: A New Era: The Present and Future of ETH.

As we all know, the Merge will end Ethereum’s PoW journey.

As the Merge approaches, what specific impacts will this upgrade bring to Ethereum and its ecosystem?

How will Ethereum scaling go next?

When will we experience the benefits of the Merge as regular users?

On next Wednesday (April 27) at 8:00 PM (UTC+8), independent researcher/former research director of Chainnews Pan Zhixiong, China Director of Chainlink Philip, and founder of Yuanyulinong (tech community) Yao Xiang will gather in GWEI 2022 to discuss the current and future of the Ethereum Merge, centering on the topic “New Era: The Present and Future of ETH”.

On April 18th, the first panel of GWEI 2022, “Friends · New Vision”, invited Shenyu, co-founder of F2Pool and Cobo, Chaojijun, community lead of Benmoqukuai, and Amber, head of DapperLabs China, bringing you a wonderful conversation of insight into Web3.

On GameFi and future trends, Shenyu said, “The Merge and the emergence of layer 2 networks will create a wave of wealth effects comparable to what we have seen in layer 1 networks with competitive public chains in the past two years. One or two dominant layer 2 networks may emerge this year or next year. GameFi takes a long time to develop, and more GameFis in the past year have been DeFis with skins on, or things with rough graphics that aren’t very playable. With a lot of new players in the industry, there should be a number of real GameFis this year, and there could be an explosion of opportunities like Axie for excess wealth in the coming months.”

When discussing the development of NFT, Amber believes that “NFT+DAO is a very natural combination, because the cultural consensus represented by NFT itself is very similar to the consensus of organizations during the operation of DAO, and she is very optimistic about this direction. At the same time, she also pointed out that under the current economic situation, DAO will definitely participate in more and more social collaboration in the future. One of the core problems is to execute without trust, which still has a great space to explore on the tool level.”

Chaojijun said, “bitcoin is the cornerstone of crypto industry, it brings together the industry’s biggest trust. If you want to keep your wealth, Bitcoin is the safest choice”, for the development of DeFi, Chaojijun said, ” At present, many DeFi protocol tokens have fallen by 80% to 90%, but the value captured by some protocol tokens every day is greater than the value of the tokens they release. He will allocate some assets according to the valuation of traditional PE from the perspective of value investment. ”

On April 19, Hu Jie, professor of Shanghai Jiao Tong University/Shanghai Advanced Institute of Finance and executive member of Blockchain Committee of China Computer Society, Meng Yan, researcher of blockchain and digital assets, and Wu Xiao, founder of WhiteMatrix, focused on the topic of “Black Swan and Gray Rhino”, the interest rate hike of the Federal Reserve, the hot spots in the market and the choice of entrepreneurs were deeply discussed.

On how practitioners and entrepreneurs keep up with the market development, Meng Yan put forward three suggestions: “First, get involved in international markets, and second, get involved in Web3, because Web3 is an important upgrade for the industry, to keep up with new trends in the industry. Third, be patient. Real demand for Web3 projects won’t come soon, but you have to trust that Web3 will, and that the network effects, combined with some of the positive feedback loop capabilities unique to the token economy, will be more evident than the familiar network effects of the Internet.”

Wu Xiao also put forward his own view on this topic “do Web3 more, do Builder more, do Trader less. Do some meaningful things more. There’s always a chance if you really do it. Web2 is so competitive right now, and Web3 just gives us a systemic opportunity. ”

Since last year, Metaverse has been the most sought-after track by capital, and Hu Jie gave this judgment: “In a market like China, there should be a great opportunity to start from To B, because many companies now realized that the use of online tools to do marketing has great potential. With the emergence of the concept of Web3.0, and the emergence of new tools with blockchain, it is not only possible to do marketing in the new technology space , and more importantly, it is necessary.”

More content can be found at https://t.me/news_8btc. Everything about GWEI 2022 will be presented on the event site, DeFiDaoNews, ChainNode, 8BTC and other all-media matrix fields. 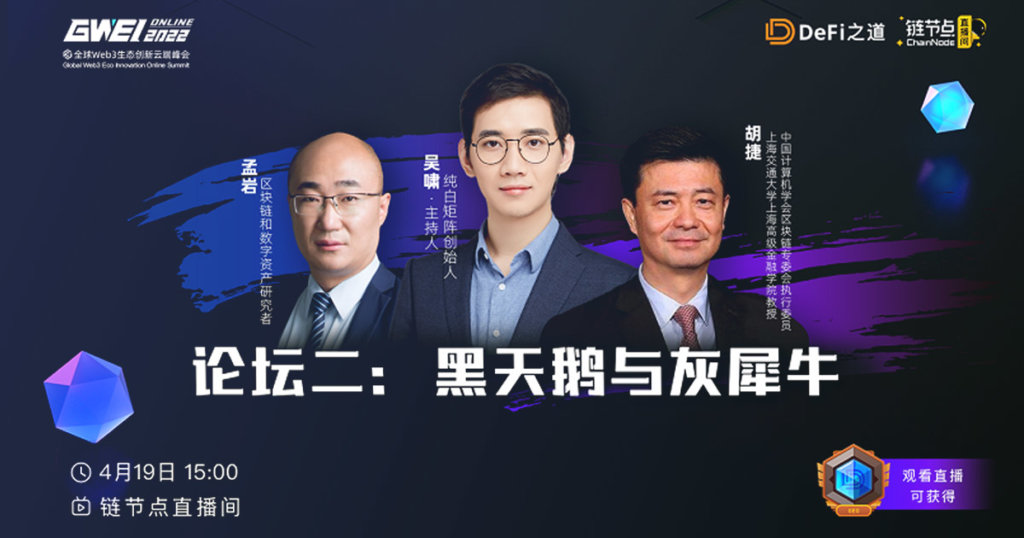